A face that always smiled upon his return greeted Dak. Moving with habit more than thought, he flung his jacket over a kitchen barstool and headed toward his girl. He couldn’t be sure if it was the events of the day, but he became fully conscious of the fact that even though the lips he kissed felt soft, full, and very female, the person who kissed him was really a male, at least on the inside.

Dak wouldn’t call himself gay. He had never touched another male in such a manner. However, during the case he had so recently spoke to his fellow officers about, he had come into contact with a male who had Skinjumped into a ravishingly beautiful female. He had not known it at the time or even while he’d experienced the best sex of his life. Through no fault of his, her identity had been raveled and she had been not only put back into her real and very male body, but also put behind bars for a very long time. But for Dak it was already too late.

He was hooked. No sex had ever been better. Since they knew what felt the best themselves, they gave it willingly. While some women accept their role with a lackluster performance, these Gender-Jumpers went at sex with a wild abandon, which Dak never tired of. At home, in an effort to prove themselves a match for any true woman, they always cooked and cleaned his apartment until it shined. And the clothes, these Jumpers dressed in what men wished women always wore.

Since his first a little over three years ago, Dak had been only dating Gender-Jumpers. He tried a normal gal again once, but became bored as soon as her had gotten her in bed. Yes, he was hooked, but looking down at his Erin’s perfect face he thought, what a way to go.

“How was your day,” she purred. Like most Skinjumpers who jumped gender, Erin tended to exaggerate her feminine nature. Maybe it was one of the many reasons he liked her so much. He had issues, so what?

“We had a serious crime involving Gender-Jumpers.” It might have been the only thing that he could have said that would cause her to drop her role. They played it safe. Erin didn’t even work outside of the few modeling gigs she did under the table. If she was ever discovered, they could both be sent away for a long time.

She retreated to an arm’s distance suddenly serious. Despite her sensuous voice, he thought he could detect the man within her for the first time in months. “Tell me what happened?”

“It’s common knowledge all over the Vid.”

“You know I can’t stand watching those lies.” She always had been a reader.

“From the looks of things, four upscale Hitters Skinjumped into a gaggle of hot little numbers and then proceeded to waste new major hopeful Felix Homes.”

Her big eyes grew wide making it easier to accept her as female again. “Mayor Edgar hates Jumpers. He’ll use this as an excuse to hunt us down.”

She was getting excited and words began to tumble from her mouth mixing chaos, conjecture, and paranoia. “Erin it’s alright. I’m on the case. I’ll take care of it.”

“It’s not okay. This is a double win for that fat freak. He loses the competition and gets to blame us for it. I hate that bastard.”

“He’s not my favorite guy. I’m not too worried about it, but let’s have you lay low for a while okay,” he said, while his hand began massaging her shoulder.

“Maybe I should jump back until this is over,” she said looking into his eyes.

He felt a tight pull in his groan. He had been living with Erin over a year now. They had been sharing a bed nearly every night for longer than that. She was the third Gender-Jumper he had dated and by far the most wonderful. “No,” he blurted out. The idea of her becoming a man again disturbed him on more levels than he cared to count.

Seeing the disturbed look on his face made her smile. She moved in running her long fingers across his face. “Why would you miss me?” He could feel her warmth. She smelled like lavender.

Her lips were near his. “Yes.”

“I could still stay over.”

“It would not be the same.”

“Why because I would have one of these?” Her other hand gave his member a squeeze to emphasize the point. Her mouth paused next to his ear. “Do you only like me for my body.”

Find out more about Dak, Erin, and the rest of the Skinjumpers here! 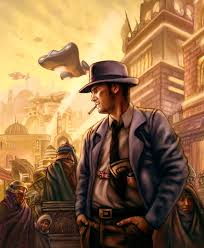