After deducing that wheeling four machines bigger than a man into the hotel would be no easy feat, Dak got a search order and went through the whole first floor. His hunch proved correct, for he found one room near the back exit that showed recent evidence of tears in the rug. There were also stains of an aquamarine color in several spots. Discarded without any attempt at subterfuge were four sets of trampware and a few other female outfits and the usual supplies.

“Waterman have this stain-”

“Matthews who checked in-“

”I’ve already got the uptake. Four Jane Does. They paid in cash, I ran the Codex they used. They never existed and if what you say is true, they will probably never exist again.”

“Damn,” he said kicking the trashcan. “Were the hell is Fosters anyway?”

“Don’t know cap.” Waterman was already gone and Matthews was wrapping up the last of the C.S.I. agenda.

“What was that cap?”

“Were are we going?”

“We’re going to pay a visit to the major. Call ahead. I hear that the waiting time there is a bitch.”

And it was. Dak was thinking that Edgar had probably slipped out some back door by the time they were finally allowed in.

Edgar met them alone. He offered them a seat, without a word, then crossed his thick fingers before him. He appeared even larger in person. Everything about him was thick, his mustache, the bloated lips they hung over, his jet black hair, and most of all his neck. His eight thousand Universals suit did little to hide his brutal appearance.

“Before we start detective, I want to know if you are planning to express even the smallest hint of a possibility that I could have anything to do with this matter.”

Dak looked up, “He was running against you.” 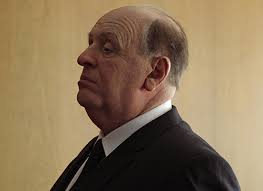 “Which means he would be the last person I could touch.” Dak’s expression didn’t match the words he was hearing. “It’s well known how much I hate Grafters and the damned Jumpers they make. This is just an example—the very tip of the iceberg of insanity that could befall us if everyone starts jumping. Crime will go unpunished. I can kill someone and be a different person the next day.

He looked Dak in the eye. “And the perversion, the filth. I’m not sure which is worst the havoc or the sickening depravity. Which do you think Dak?”

“It matters little what I think. I’m an objective investigator.”

“Are you? Your girlfriend, you call her Erin don’t you?”

“She looks a lot like a Joy-model. Its name is Erin too. What a strange coincidence. How is it they look so much alike? Are they the same model?” Matthews shifted uncomfortably.

“I have no idea what you’re talking about.”

Edgar coughed, like he was hiding a smile. “Like I have said. I have files on all suspected Jumpers, Mr. Dak. They are my enemy and I have pledged to stomp them out of my city. This is obviously a frame up by their ilk in an attempt to make me look bad. Their transparent attempts are quite shallow.”

“Well, if that is all gentlemen, I’ll see you after you bring these Jumpers to justice.” Dak could feel his pulse pounding in his forehead. Edgar already knew about Erin.

“Oh and Dak,” the Mayor called as they opened the office door. “Make sure you find these criminals, or I will have my men make an investigation of my own, if you catch my meeting.”

They walked for a hundred yards before Matthews worked up the nerve to break the silence that moved like a taunt bowstring between them. “I ah…is it true, is Erin…?”

Matthews had been a close enough friend to have met Erin on some of the few times they dared leave the house together. Dak couldn’t speak and only nodded. When they reached the car, he let Matthews drive.

“Two years from what she tells me. She has had to Jump back a few times, like when her mother died. She doesn’t let me see her then and I am fine with that. I just know her as Erin…she could be just any other girl.”

“But she is a model, a clone. Damn it Dak she is the same model as one of the girls that assassinated Homes.”

“But how could you know? How could anyone know? That’s why these Skinjumpers are outlawed in the first place. Goddamn it Dak, you’re a cop. I respected you.”

Dak could think of nothing to say.

“What a second, what was this person before they became Erin? Was it a guy?”

“Suits me fine. I need to think this through. Call me when you’re ready to work on this case, if you ever are?”

Matthews left Dak on the side of the road. Papers and trash blew by him and he was forced to take in more of the cities foul smells than he would have liked. Cripples hobbled in the streets fighting Dregs for handouts. His appearance must have screamed Enforcer for most of them left him alone.

So much ugliness and pain. Compared to what he was walking through, was what he and Erin had really so wrong? He worked hard and tried to do what he could to help. Was it so wrong to have some glimmer of love?

He fought back tears and kept walking. It was only eight more miles.

You can find out more Skinjumper Action Here!