They shared a quiet ride home. Dak’s mind was full of questions, but Erin’s mood remained taciturn. It wasn’t until they were almost back to their small apartment that she asked, “You aren’t upset that I dragged you into things.

“Being with you was my choice. I knew what I was getting into when I chose to date a Gender-Jumper.”

“Did you? I think you thought of it as a sexual choice, the thing that blazed your passions higher than anything else ever could.”

Only the hum of the auto interrupted the silence as they pulled into the underground garage. It was a dark greasy place, but the complex tried to keep it secure.

“Erin,” he started slowly. “None of that matters now. I love you and it’s just that simple. If this means I have to do a little to help the Jumper community, then so be it. You know I personally don’t think Jumping should be illegal and I certainly would never want anything to happen to you. I would lay down my life to protect you.”

“Really?” Her voice was barely a whisper as she turned to face him. Tears formed in the sides of her large green eyes.

She rushed into his arms and soon it was all they could do to postpone their appetites until they could make it to their floor.

As soon as they left the lift, he knew something was wrong. He moved Erin to the side of the corridor. “What’s the matter?”

“It looks like our door’s open.” Moving closer, he found that it wasn’t just open; it had been broken open. He used one hand to keep Erin back, while the other filled with his Flashpistol. Moving into the apartment, he hadn’t made it five feet before heavy blasts broke out and plaster began to fill the air with choking dust. Only a quick drop to the floor had saved his life. Now however, the walls over his head were being ripped away as some serious weaponry continued its assault.

Remaining low, he rolled into the bedroom on his right. He was almost as surprised as when the bullets had broken out, when Erin dove in right behind him. The hitman shifted his attacks to the walls of their room, which began to rain down on them, whitening everything as more chalky powder covered the room.

“Screw that. Give me a weapon Dak!”

“I got something better,” he said with a grin and started for the closet. Seconds stretched into years, as he fumbled with an old brown suitcase. The walls continued to blast and splinter.

His hand came away with a silver object the size of a dinner plate. In its center was a red panel. Dak’s fingers danced over a small set of controls. Looking up he saw that the gunfire had created a large hole just over them. After punching a few more buttons, he reached back and flung the device through the hole.

“Get down,” he yelled as he flung himself over Erin’s slight form. Her soft body cushioned him nicely.

A bright red flash blinded them for less than a second. His teeth throbbed for a moment, but they were spared any farther effects.

Erin sat up, once he let her, and tried to brush the dust off her black dress. It was not working. “Can I have a gun now?”

“I don’t think you’ll need one,” he said, while he helped her up.

“What was that thing?” She asked. Her heels crunched the fragments of plaster as she followed him into the hall.

“Something I picked up on a whim from the Market. It called a Newt, which is short for Neutralizer I think, and it creates a large stun blast. I’ve had it for years. This is the first time I have ever used it in my own home.”

Standing over the, would be, assassin, they discovered that the device had succeeded in its assigned task and he was quite unconscious. The figure was tall, ugly, and bald. His wore a tight gray uniform of common make. Besides his oversized and brutal continence, the only odd thing about him was his tech. He had a few small items which Erin looked over. Meanwhile, Dak took up his blaster. It was huge and of a make he had never seen. The barrel was 20 millimeter wide and it had a clip the size of his forearm. How the man got it into the building was a mystery.

Suddenly a sizzling sound reached his ears. Suspecting some type of bomb, he was prepared to flee, but what his eyes fell upon did just the opposite and glued him in place. The man’s body was becoming bloated. Skin opened and leaked fluids, which smelt worse than a decaying body that had been left in open sewer.

Erin had found her way into his arms and he hugged her tightly as the assassin continued to dissolve into a foul puddle of wet cells.

“Erin is this guy a Jumper?”

“I’m not sure,” she said pressing against him. “I’ve never heard about anything like this. Maybe the Doctor would know.”

“Well it’s too late to see him tonight.” The sounds of Enforcer boots could now be heard sprinting down their hallway. “I’m going to have some explaining to do. Let me do all the talking.”

“Okay,” she said giving him a quick kiss. “After all I am just your innocent little girlfriend.” When she batted her eyes, it was all he could do to keep from Laughing.

Check out more about Skinjumpers here! 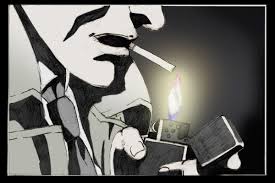