Moving through the stygian night, he followed the lanky form of Rick-the-dick. They were passing through the slums of southern New Cluster, which were some of the worse parts of the city and of course where they all lived

Streetlights, that hadn’t worked for a decade, stabbed the earth like black daggers. Overhead, the smog obfuscated any hint of the stars he knew lurked above. Leaving the major streets, Rick weaved through the alleys. These grimy streets had gone from being thoroughfares to hard-bitten squats for all manner of dregs.

Normally, Talon would be put off entering these suspect areas, but the tall imposing figure of Rick-the-dick kept the others at bay. Gazing left and right, he saw gangs of dregs. Many eyed them as potential prey, but they had chosen to keep their distance so far.

“These places are too crowded,” Rick hissed back at him. Talon also thought that these folk probably did something with their dead, other than let PRs drag them away, but he kept his opinions to himself.

The pair moved away from the throbbing seas of dregs and headed for the canals. These canals were dryer than a bucket of sand left in the desert and were now just crumbling monuments to a time when rivers still moved across this part of the city, unless you counted the garbage-choked flashfloods that ripped through New Custer in the spring. These were long gone now, and the canal loomed before them like a dark scar cut into the Earth.

People still malingered here and there, for it was rare to find any sort of isolation within the city limits. They moved closer to the canal. A walkway ran along it, which had once been part of a recreation program, but due to the smog, long gone were the days when one could exercise outside. Such things now belonged only to those rich enough to afford the indoor gyms, or people like him that worked off any nutrition he received through drudgery.

A bridge formed a black arch, which blocked half of the northern city’s lights and created a wide shadow across the trail. Rick headed for it. Talon hesitated at the lip of darkness. “Come on you wuss,” Rick ordered. Normally Talon wouldn’t have gone anywhere near places like this, but supposed that they were the predators now.

To his right, only a thin railing kept path traffic from tumbling into the canal bed far below. To his left, the darkness thickened where the bridge continued into a narrow space between the road and the dirt below. Rick had some sort of light and was shining it into these recesses. Talon hurried closer to the light. Looking back at him, the grim form of Rick nodded, the light reflecting off his archaic glasses. He motioned with his head and Talon saw a tangled sleeping form. The man was so filthy, he nearly camouflaged himself into the dirt below. 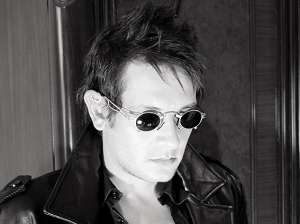 “Is he dead?” Talon whispered.

Rick’s response was to kick the man in the shin while he removed a pair of nun-chucks. The man groaned, but made no move to retaliate or even awaken.

“That’s a situation which can be easily rectified.” Then with a snarl, Rick tore the old man from his bedding and violently dragged him to the edge of the dirt.

Screaming began and ended quickly, when Rick laid the nun-chucks into the old dreg. Talon couldn’t move as the sick crunches filled the air. Rick beat on him again and again, until there was no doubt that the old man was dead. Then crouching over his victim, Rick began to search the man in the faint hope that he might possess something valuable.

They were right next to the rail that separated them from the long drop into the rocky canal. Without really planning to, Talon rushed forward and gave Rick-the-dick a mighty shove. Rick’s eyes grew wide, more with anger than fear, and he clutched at Talon as his body balanced precariously on the railing. Fingers tore strips of hair from Talon’s mohawk, but with a grunt, Talon grabbed the base of Rick’s boots and upended him backwards over the railing. Rick didn’t even bother to scream when his body plummeted into the debris-choked canal.

Another person might have just fled back to is home and hoped for the best, but Talon knew what sort of end that choice would led him to eventually. He had different ideas.

Learn more about New Cluster and its Heroes here!!!